Are you familiar with my Frugal Fashionista Looks for Less series? If not, scan the archives and join me as I show you Designer Outfits for Pennies on the Dollar. Did I mention that 90% of the items are second hand? 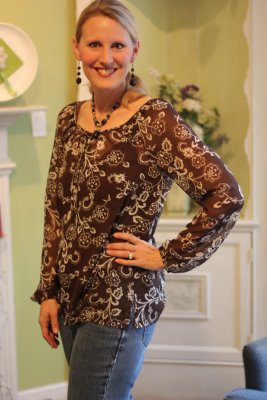 These are the two pictures I snagged from that post.I am just ignoring the fact that those jeans are too tight on me right now, and that my hair looks identical. 😉

Click on over to see the details of this designer outfit for $12, and how this Frugal Fashionista series began (then come back). 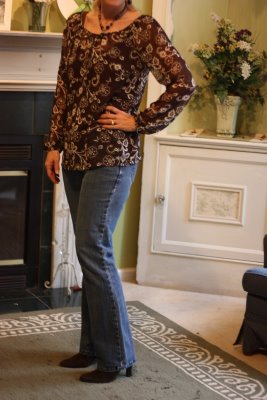 As I was clearing out my closet last week, truly inspired to shop my closet and create multiple looks from one item, I ran across this shirt. I haven’t worn it in over a year, and typically, the organizing rule states if you haven’t worn it in a year, get rid of it. I realized I didn’t want to, but that also meant reinventing it, so I did. I knew I had posted this very same shirt already (gasp), but I thought I could encourage some of you on a strict clothing budget right now to reinvent looks yourself. 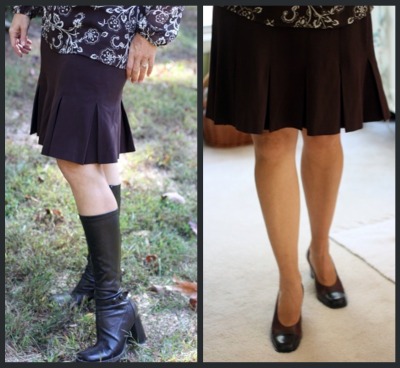 When I came downstairs, my daughter declared that my $4 Goodwill Bandolino skirt looked like a Cheerleader skirt. Now, that is never a good statement, even if she meant it as a complement.  I can understand her sentiment since I had it paired with these leather Bandolino pumps that I purchased at a yard sale for $2. (Yes, I had no idea that they were the same brand as the skirt until I just peeked to tell you). Even though quality runs deep through these shoes, they are more office attire or something traditional, so I threw them off for my fun, brown boots. Isn’t it amazing how just switching out footwear drastically changes the look of an outfit? Seeing them side by side shows how foot ware stands alone as a statement piece. 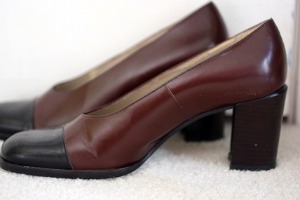 In a few minutes, I was able to browse through my closet, vary this look by just using what I had, while still making it fabulous for both casual and dressy. 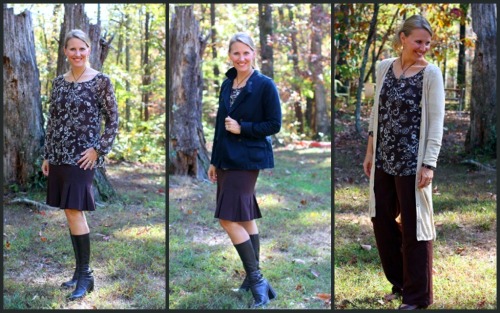 Now is the time to grab out those sweaters and jackets. By adding a $5 Black Jacket (Goodwill) to the skirt, it was instantly updated and chic. By swapping out the black jacket for a long sweater, and putting on casual, brown stretch pants, it became instant comfort for around the house, yet hip enough to go out on a moments notice. (Remember when I wrote about the asymmetrical sweater and how I was investing in a few since I couldn’t find them second hand? Well, the following Saturday, I scored with this $1 yard sale sweater. No, it’s not asymmetrical, but it’s so cozy.)

The best part about all of these looks, is that each one came in UNDER my $15 Frugal Fashionista goal, including the shoes and boots.