Part of embracing a frugal lifestyle is opening oneself up to unique, creative or maybe odd sources for saving money. Now remember, just because you chose to shop creatively doesn’t mean you are sacrificing quality, just ambiance, but this suggestion may leave people wondering.
I’ve driven by this Truck Salvage Grocery store many times during football season, but there was nothing memorable to make it stand out, until my eyes caught the 50% off symbol. Realizing that’s often how it is with hidden, frugal treasures, I decided to check it out. There’s no marketing, no ambiance, no bells and whistles (quite an understatement), but therefore, they can pass on the savings to us, the consumer.
Do you remember My “Thrifting for Food” post? That was a prime example of frugal diamonds in the rough. I spoke at a conference last week where hundreds of women drove right by that store – one of my favorite spots in the world, and no one had a clue because of its poor marketing and signs. (Trust me, I told everyone at the conference, and they had more customers in a day than the whole week.) I bring that up because if you embrace this frugal lifestyle with your eyes, ears and mind wide open, you have no idea the fun things you’ll find. 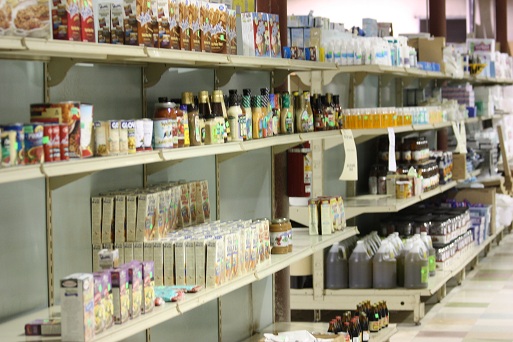 One unique place to find some great deals are trucking salvage stores. (Don’t ask me why some are called trucking salvage stores, maybe because they bring it all in on trucks? 😉 )Across the country are hundreds of salvage stores of all kinds. Some are strictly salvage grocery stores, and some are a hodgepodge of everything you can imagine.
Many think of these stores as primarily a damaged goods store, but I haven’t found that to be completely true. I am assuming that just like thrift stores, all salvage stores are not created equal, so I am only referencing my experience.
Salvage Grocery stores are typically those items that might not have sold at the grocery store due to overstock, low interest or yes, a flat was dropped by a forklift in the warehouse, denting a few cans, thereby making them unable to be sold in a traditional setting. The regular retails stores can’t sell tons of cereal boxes with crushed lids, so they ship it out to a liquidator. Some salvage grocery stores, or ones that may be called Scratch and Dent stores,  sell products that are approaching the “sell by” dates or some that have even passed, but all these stores are approved by the government. They understand that crackers taste exactly the same one week after the “sell by” date, are 100% safe, and fill our bellies just the same.
Since salvage store shipments vary day to day, the thrill seeker never knows what to expect. So many always ask me how to save money on organic or healthy foods, well, I certainly hit that jackpot when I found shelves or organic snacks, salad dressings, pasta and more. These prices were deeply discounted off of what the tag said, another plus. 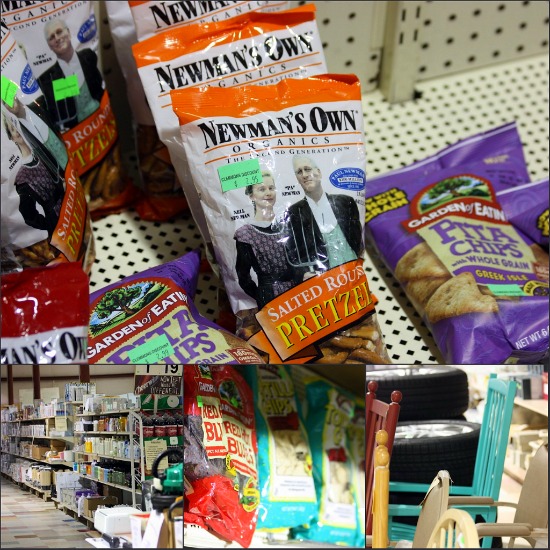 Not only were there rows of foods, but household, home decor, furniture, clothes, tools – you name it, they had at least one of it. Yes, there was truly something for everyone and most of this stuff was over-stock, not damaged. As you can see, there’s absolutely no ambiance and I realize that it may take a few of you some guts to walk into a store like this, but if you do, you may be overwhelmingly surprised at the great deals to be had on just about everything in your home.
Now, where do you find them?
Ask around. Most stores rely on word of mouth marketing where only the truest of Frugalistas will know the location. If that doesn’t work, try googling Salvage stores, Salvage Truck stores, Salvage Grocery stores or Scratch and Dent stores (all using your city or surrounding cities in the search terms.)
Have any of you ever shopped at a Salvage Store? Have you found any treasures? If you haven’t and decide to give it a try, let me know how it went (be prepared for anything). 🙂