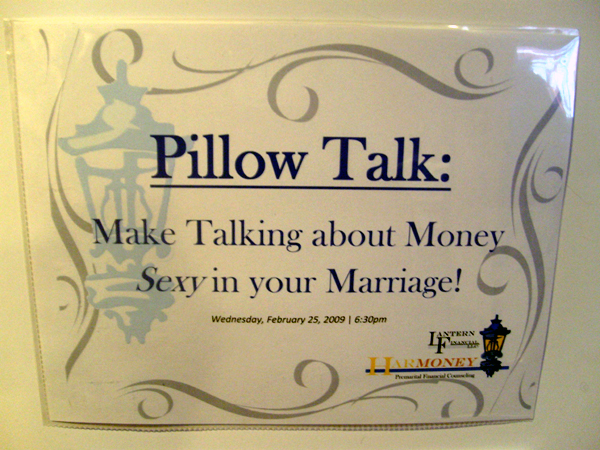 Yesterday, I shared a bit about The Lies and Secret Life of Money, a touchy subject that I don’t necessarily enjoy writing about, but one which I thought was pertinent with this month’s topic.
Since there are so many emotions tied around either our pursuit or lack of money, finances and those emotions take on a life of their own. I know, I have been there, and have had wide ranging emotions.
When I came across the above picture for Part Two, it cracked me up, and I was thrilled to infuse a bit of light heartedness as I finish up these heavier financial topics, and head onto the more fun aspects of personal finance.
In this particular seminar, the financial adviser reached out to engaged couples and newlyweds and encouraged them to make money talk sexy. By lighting candles, drinking a glass of wine, playing games, giving rewards after financial talks,  and in my opinion, continuing to flirt during these discussions, her hope was to make these talks less painful.
Understandably, her target audience was newlyweds. I think she understood that by building a marriage on financial transparency early on, a huge amount of conflict will be avoided once the “honeymoon phase” is over.
Marriage is HARD work.

Statistically, 50% of all marriages end in divorce, with the number one reason sited for the divorce – money.

That statistic alone leads me to encourage couples to come to a marriage completely financially naked. It’s recommended that before marriage, couples exchange a list of what they own and owe, their credit scores, what they earn and spend. One should sit down and discuss those items twice a year. If done, problems can be ferreted out before they become so large you need to hide. Deal with them before there’s a foreclosure notice on the house.
“”There is no such thing as an innocent financial fib,” says relationship therapist Bonnie Eaker Weil, the author of Financial Infidelity. “Secrets destroy intimacy, and anyone who is hiding money is also hiding their feelings. They may not think they’re doing anything wrong, but they’re used to being an ‘I’ instead of a ‘we.’
In our family’s bought with unemployment, there were many lessons  learned (again); some which I wrote about in Dealing with Unemployment: One Year Later. The key area that I did not address was Candid Communication.
For the most part, my husband and and I are both open books. We’ve always had open and candid communication in our marriage, but one thing I didn’t count on was a long term period of no income – again. I should have remembered from a decade ago how sensitive it can be to address those issues when one is in the midst of difficulty, but I didn’t.
Since my husband and I had a large emergency fund saved (based on previous experiences where we didn’t), I wasn’t worried that this unemployment was going to hit us drastically. I was even presumptuous enough to think that we might “double dip” on our income since he was given a partial severance, and naively, I thought he’d be hired within a few short months. Because of this, we didn’t set up time to talk specifically about our finances, or the job hunt, or all those unanswered questions that become awkward as time goes on.
After six months, our marriage was still solid, and communication about other areas was fine, but any time I would mention employment, finances or the job hunt, it would come across as nagging, even if my heart didn’t intend for it to be.  It became the elephant in the room, and instead of dialoging, we avoided the topic, making it more awkward as the months ticked.
While we met our goal of avoiding debt that year by doing every thing possible to bring in extra income, one critical area we would improve on was more candid communication about finances during that period.
Now, as soon as I hear of someone beginning unemployment or wanting to get their financial house in order, I encourage setting a date for a weekly “Money meeting.” This takes the stress of wanting to talk, or nagging on a regular basis out of the equation. With a money meeting, everyone knows that at 7:00 on Monday nights, a candid check in occurs of how the week progressed. It allows the female, who typically wants to have those emotional “talking needs” met, know she will have a time to be heard AND to listen, while the man knows he needs to talk and share what’s going on. It helps eliminate the un-necessary nagging throughout the week.
I highly recommend any one feeling financial pressures to implement this immediately. If your finances are in order, you determine how often your “money meeting” should take place. Determine what’s best for your family, but still allow a time to check in regularly.
So, back to her basic premise.
Is Money Talk with my hubby sexy? (I kind of blush since I have used the words sexy and naked in one post. :)) I don’t think I would have ever thought about transparent financial discussions as sexy before, but I do believe it is.
Knowing my husband values my opinion on such important issues, and that we are committed partners on this journey is definitely sexy.  Now am I going to flirt with him as we talk about attempting to pay off our mortgage early or investing? Well, that may bring more spark to this 18 year marriage, but I have to think about that one. 😉
By taking out some conflict of talking about money in our marriage, we can focus on other aspects, and I know from my husband’s perspective, he would love that.
Do you have a hard time talking money when the going is difficult or was it only me?