There’s nothing that says warm and cozy more than a roaring fire and a bowl of hot soup.

Recently, we’ve had quite a few opportunities for that, haven’t we?
I’ve taken advantage of these snuggly days by maximizing on a few comfort foods.

The irony is that when I loaded these photos, it was 15 degrees, and now as I am typing – it’s 80 outside, but supposed to get back to 30. How did that happen in 4 days?
Now, I am not going to post the recipes for the soup.

You can probably find 1,000’s in those dusty cookbooks that line your cabinet, but I want to feature a good ‘ole fashioned favorite that has gone by the wayside.
Yep, the dumpling.  THEY ARE SO AMAZING!!

When I mentioned I was going to make dumplings for our stew, my 11 year old son immediately said, “Gross.”
He had no clue the treat he was about to partake, nor did I remember just how simple they were to whip together. Not to mention my favorite – inexpensive…pennies, people.
It had been awhile since I made these, but I guarantee, these will now be a staple in our home.
SERIOUSLY, it took 3 minutes to mix up the dough, and voila, I felt like I was Rachel Ray.

That’ it…that’s all the ingredients, and you have them in your house right now!

Sift dry ingredients (* if you want).

Reduce heat (don’t lift cover); simmer 12-15 minutes or till done. (*as soon as my kids saw them expand, they wanted to try them. We probably only waited five minutes for the smaller ones to finish.) Makes 5 servings.

The kids loved dropping the dough into the boiling soup
and seeing them “blow up.”
We did tiny ones, ginormous ones, and everything in between.
In fact, I had to mix up additional dough because the kids were eating all the dumplings out of the stew, and there weren’t any left for the hubby. 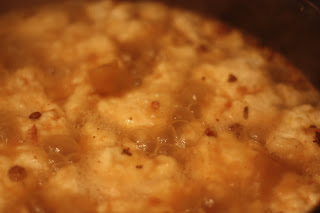 No time to make homemade soup?
Make it home made your way, and use a few cans of chicken noodle soup, bring to a boil and just drop some of these in.
You will fool everyone into thinking you slaved over this special cozy meal. 🙂

Another quick and easy option is to use the Free or nearly free Cornbread mixes that “we” get when they’re on sale, and our coupons are doubled.
You’d use that mix in place of the Bisquick mix. 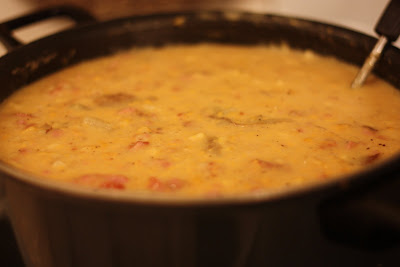 Creamy Corn Chowder
(in which I went ahead and added some red potatoes to it so that it would thicken up even more.)

I doubled this and saved some for the next day.
Soups are always better the following day since it gives the spices time to blend.
Soups are another wonderful freezer meal.
Just pour the extra in Ziplock bags to maximize your freezer space.
Just FYI, my son can’t believe I am posting this picture. He pointed out that it looks like soup they might serve at an orphanage. You know the kind where they don’t have enough money, but want to feed a crowd?
Hmm…he may be on to something. 🙂