Princess for a Day

Since I have to be at church between 7 – 7:30 am many Sundays, I have had to let a few things slide over the years.
A few of those things have been a cozy Sunday morning “dream” breakfast with the family, as well as getting the final approval on the kids’ choice of dress. As they have grown older, it hasn’t been as much of an issue, but wow, the scrapbook that we could have had.
I know that many ladies pick out outfits the night before, and I have on occasion. But for the most part, that just hasn’t been at the top of my Saturday evening priority list.
My husband ROCKS!!

and the fact that 2/4 weeks of the month, for the whole of our marriage, he has single handedly taken care of getting the kids ready and to church on time, speaks for itself….UN.BE. LIEVE.ABLE!!! I know most wives won’t let their husbands dress the kids…ever!
With that being said, over the years it has been somewhat of an unspoken joke amongst the Sunday school teachers….”oh, Jen must be singing this week.”
Yes, some of the outfits have been absolutely hilarious.
For the most part, my husband just lets them pick out what ever they wanted to wear…ok, not for the most part….he did.
Plaids, and stripes…..orange, purple, red – it doesn’t matter.
Mismatched shoes, and a few choice times – no shoes at all.
And during this past Christmas season, a beautiful velvet dress with tennis shoes ….I admit, often the shoes are not put back where they should be.
I know, I know…if I don’t take the time to pick them out, I can’t complain.
Through it all, I have learned many things about myself.
Namely, to conquer that pervasive attitude of pride that just manages to sneak its way in when you least expect it.
What will people think of me?
Hopefully, they see me as a mom who passionately loves her children. But more importantly, sees me as a wife who appreciates the husband who has faithfully supported her, and given of himself so that she can use the gifts that God has given her…even when it means putting up with the grief that she gives about the outfit choices.
Thank you, honey….I LOVE YOU!
This is the precious blessing that greeted me this morning as I picked her up from her Sunday School class. Re-encated at home…of course. 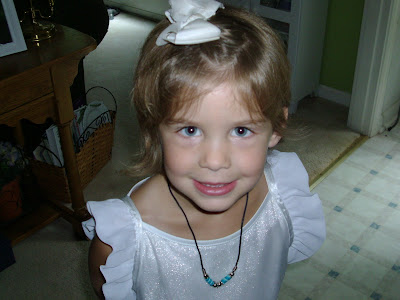 Ahhhh…..don’t we all just want to be princess for a day?
Well, she was…her princess dress in all its glory.
I must say…after I got past the initial chuckle, she sure does look cute!
I am so thankful that she is conscious of the “no white after Labor Day” rule.
She got it all in on August 31st. 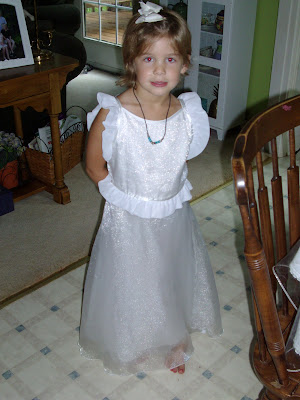 She is a Precious Princess, and the daughter of the ONE TRUE KING!!