Expressing oneself openly is a dynamic part of our happy, but harried homestead.
Many people say to me that they want to be a fly on our wall…I doubt that. You would definitely get smooshed.
I let a little chaos, maybe some clutter, and sometimes dog hair survive, but definitely not flies. Anyhow, this is the dialog that I am overhearing…. right now…as I type.

This conversations is taking place between my five year old daughter, and six year old nephew (who many of you know…lives next door on our homestead), and some more funnies have proceeded this, but I couldn’t type fast enough, nor did I have the forethought to do so. This conversation sets up the sinful little story from yesterday.

At this exact minute, Miss Priss is exclaiming, “You know that my mom has talked to you about cuss words. Yes, she has! (Yep, hands on hips with a little finger pointing as she talks). You know that they are not allowed in our home….I hear you saying that cuss, and it’s not allowed.”

Six year old responds….”Duh, Emma, Donut is not a cuss.”
I chuckled…….’nuff said, love it when I don’t have to intervene at all.
The cussing was clarified.

This conversation came on the heels of one yesterday that made my sis-in-love and I have extreme heart palpitations.
6 year old nephew came to us with a very contrite heart exclaiming that he had observed some very “bad” activities that had taken place previously. We were distraught to hear his rendition, but knew that the facts needed to be confirmed before any action took place. I guess this was a time of confession because many of his “sins” now came pouring out in the most stoic fashion.

He admitted, “Mom, I also said the four letter “F” word.”
We were now truly hyperventilating at his declaration, especially considering the exact number was involved. I was praying it was something else, but he sounded WAY too sure of himself.
This mom of ten wisely asked, “What 4 letter “F” word, honey. It’s OK, we need to know the truth.”
“Mom, come on, you know the 4 letter word.”

“Well, I just want to know which one you are talking about. You won’t get in trouble.”

“Mom, Ok….I’ll tell you…..FLEE…that’s the one. You always tell me that when I get in a bad situation that I should FLEE, and that’s what I did.”

All I can say is “Praise the Lord for 4 letter “F” words” and children who are learning valuable life lessons along the way. Is there any way for them to escape the inevitable?
Don’t think so, but I certainly don’t mind postponing it as long as possible.

Here are the two cussers on the right. 🙂 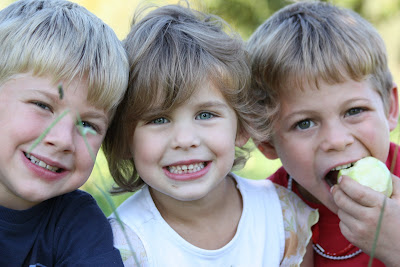