When Your Child Decides to Go Vegetarian

I have often described my teenage daughter as a party looking for a place to happen. She’s lighthearted and funny, and her interests can change as often as the weather. So when she popped into the kitchen while I was cooking dinner one night and announced that she was going to be a vegetarian, it was not exactly a stop-the presses kind of moment for me.

We talked a little about the pros and cons of a vegetarian diet, and why she wanted to try it. It turns out that she and her two best friends had decided this together. It didn’t hurt that the lead singer of their favorite band was a vegetarian, but that only added to my impression that it was just a passing fad. I figured they’d cave the first time somebody offered them a slice of pepperoni pizza.

That was nearly three years ago.

As a few weeks passed and it became obvious that she was more serious than I had realized, I went into “negotiation mode”. First, I told her I would do whatever I could to support her, but I would not cook separate meals for her. That means when it’s feasible I adapt what I’m cooking for the rest of the family so that her portion is meat-free. It’s easy enough to prepare a big pot of pasta sauce and scoop out her portion just before I add the meat. Same with soups and stews. If I can’t adapt a recipe, she is responsible for preparing her own meals. And it can’t be macaroni and cheese with a side of fries – that one bummed her out a little. The nutritional value has to include more than carbs.

Second, I insisted that she still eat eggs, fish and dairy products. I know there are those who say this is not a true vegetarian diet. I also know it’s possible to get adequate nutrition from a plant-only diet, but it’s practically a science. Honestly, I work full-time and like most families we are often rushed at mealtime. Eggs, fish and dairy are quick and versatile and give a huge nutritional bang for the buck. Besides, I don’t think she could give up cheese anyway (see mac & cheese comment above).

Finally, we went into “research mode”. I’m a librarian so this part would have been easy for me, but I wanted her feel a sense of responsibility for her own choices. I had her look up the USDA guidelines for nutritional intake. Then we took it a step further and researched protein needs for someone with her activity level. This was where it got interesting. 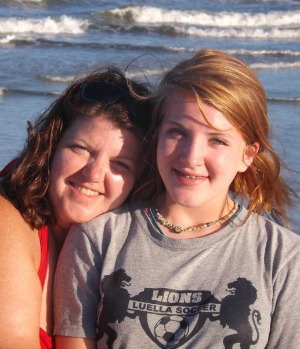 My vegetarian child is also a two-sport athlete. She’s a soccer fiend – rec soccer in the fall with a community league, and varsity soccer in the spring at her high school. She also holds a blue belt in Brazilian Jiu Jitsu and has several regional championships in her weight class. Since there’s no “Jiu Jitsu season” this requires year-round training, and it’s intense. Based on her weight, age and activity level, this put her daily protein requirement at a jaw-dropping 98-120 grams, depending on which source we used.

Our next step, naturally, was to research good non-meat sources of protein. Not surprisingly, these included fish, eggs and dairy; seeds, nuts and nut butters; tofu and other soy products, and peas, beans and lentils. However, most beans don’t have all the amino acids required to make a complete protein. Combine beans with rice, though, and you magically have a complete protein. Without getting bogged down in the technicalities, think of Mexican and Cajun-style foods as complete proteins – really, any meal that combines rice and beans.

I was surprised to learn that whole grains can be a good source of protein. Yep, that means bread has protein, which is good news to us carb junkies. A regular-size slice of bread has about 4 grams. Cooked brown rice has 5 grams per cup, and it’s so simple to throw a little rice into a soup or stew without changing the flavor or character of a dish. The real powerhouse here, though, is quinoa. If you’ve never tried it, it’s similar in size and texture to barley, and like rice and barley it can be used as a main ingredient or an addition to practically anything. One cup of cooked quinoa provides a whopping 18 grams of protein and nine grams of fiber.

Now, almost three years later, my daughter is nearly 18 and thriving. To be honest, she never ate much meat anyway. She’s what I call a “texture eater”, and something about the mouth-feel of meat always put her off a little. So she hasn’t really missed it, although she’s been known to experience a moment of weakness at the smell of bacon cooking. As for me, after the initial learning curve, having a vegetarian in the house has been easier than I expected.

I can now adjust, adapt and improvise without spending extra time or money.

We even have a few recipes that the die-hard carnivores in our household appreciate. Try them out, or experiment on your own, and you’ll probably be surprised at how easy and tasty it is to have a meatless meal once in a while.

Do you have any creative suggestions or recipes for incorporating more proteins into your diet, without turning towards poultry or meat?

By day, Kathy Pillatzki is a public library administrator and writer. Evenings and weekends find her juggling a busy family and a household full of three teen daughters, pets, friends and food! When I (Jen) heard how she approached her daughter’s decision to choose a vegetarian lifestyle, I knew it would be an interesting topic for Tasty Tuesday, especially since I am always looking for healthy ways to incorporate protein into my own family’s diet. Our growing teen boys need a lot of protein in their diet, but I’m hesitant to just load up the meat and enjoy incorporating similar ideas to Kathy’s .

Thanks for the great suggestions, Kathy.