How did Mother’s Day Begin? 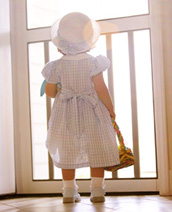 Celebrating the gift and honor of motherhood can be traced back throughout history. In the US, however, it began as one daughter’s desire to share the legacy her mother instilled.
So, I thought this little bit of history might be interesting.
In 1907, Anna M. Jarvis  (1864-1948), a  Philadelphia schoolteacher, began a movement to set up a  national Mother’s Day in honor of her mother, Ann Maria Reeves Jarvis.  After Anna’s mother passed away, when Anna was 41, she missed her mother very much and wanted to instill an appreciation to celebrate mothers while they were still alive and not wait until it was too late.  She hoped honoring this day would encourage respect and love and build family bonds. She  solicited the help of hundreds of legislators and prominent  businessmen  to create a special day to honor mothers.

On the 2nd anniversary of her mother’s death, Anna honored her mother at their home church. She handed out  her mother’s favorite flowers, the white carnations,  as they represent sweetness, purity, and patience. Anna’s  hard work  finally paid off in the year 1914, when President Woodrow Wilson issued the first proclamation making Mother’s Day an official national holiday.
On Mother’s Day, the U.S. flag is to be displayed on government buildings and at people’s homes “as a public expression of our love and reverence for the mothers of our country.”  Slowly and gradually,  Mother’s day popularity grew along with the emphasis of commercialism.   This was never Anna’s intent, as she believed  that the day’s sentiment was being  sacrificed at the expense of greed and profit.

Regardless of Jarvis’s worries, Mother’s Day has  flourished in the  United States. The second Sunday of May has  become one of the most  popular day of the year. Although Anna may not be with us, Mother’s day lives on and has spread to various countries of  the world.  Many  countries throughout the world celebrate Mother’s Day at various  times  during the year, but some such as Denmark, Finland, Italy,  Turkey,  Australia, and Belgium also celebrate Mother’s Day on the  second Sunday  of May.