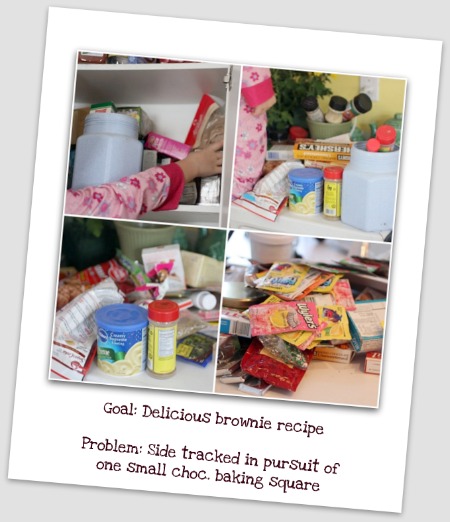 It started as a delicious thought; Mother-Daughter baking and bonding time.
What better goal for a school morning that to conquer the perfect homemade chocolate brownie recipe. But alas, the recipe called for a chocolate baking bar. Hmm….it had been a long time since I needed one of those, but I KNEW that I had one in my baking cabinet somewhere, and I was determined to find it.
One hour later, the chocolate bar was found, the cabinet had been emptied, and the unending processes of purging old spices, expired frostings, and who knows what other unique intricacies, had been completed.
Has that ever happened to you? Have you ever started with a simple goal, and gotten side tracked so profusely that your entire schedule took a U-turn, as if life was a total tangent?
Yes, mother-daughter baking and bonding time became mother (daughter quickly got lost) clean out cabinet because your pantry wasn’t organized time.
And thus, the birth of the NO FOOD WASTE WEEK!
It was terrible to see what got buried in my baking cabinet, and if I had to explain some of the spices? Whew –  I think they were passed down from my mother, and from her mother’s mother. I made  a commitment to myself to keep some of those items rotated more regularly, so that the newer items are put at the back, while the older items are brought forward.
How is your NO Food Waste Week going?
For brunch, I reheated some biscuits, and served “yokey” eggs on them. For snacks, my big boys went to open another new box of cereal, and I cried, “NO WAY. We are finishing the FOUR that you have already opened.” (Yes, I admit. There is a downside to being a Grocery Guru with an unlimited supply of cereal.)Today I didn’t make dinner because I was working on cleaning out some of the left overs.  I had some baked ham from a few days ago, which we heated and served on the crusts (yes, I made them eat the crusts) of homemade bread. Drizzled with some honey mustard and lathered with butter, it was yummy.
We have  a lot of little things left over which won’t be enough to make a meal or even enough for snacks, so I am going to have to get creative this week. I hope you’re joining in the challenge of being more cognizant of it as well.
P.S. Eventually we did get to the delicious homemade, fudge, brownie recipe, and it was a hit. My daughter rocked it! Recipe will be coming soon.